Danny Green is one of the most well-known athletes in the country, and among Australia’s most successful boxers. He is the winner of four professional world titles. Danny’s enormous power, instincts, and tactical aggression are unparalleled; however, he is equally well known for his gregariousness and good humour outside of the ring.

‘The Green Machine’ left school young to become a carpenter, but also found his childhood dream of becoming a world champion boxer a realistic possibility after perfecting his skills and instincts, and emerging a very promising and strong fighter.

Danny’s is a fan-favourite, greatly admired in the community not only for his grit and determination inside the ring, but also for his philanthropy and generosity - the former world boxing champion started the Danny Green Fighting Chance Foundation as a movement towards fighting hunger in schools.

For the past decade, Danny Green has appeared regularly on our TV screens; interviews on The Footy Show and The Project, a runner up on Dancing With the Stars, and on A Current Affair campaigning against violence on the streets.

Preventing street violence is important to Danny. In 2014, he produced and funded an ad campaign addressing alcohol-fuelled violence which the NSW Government arranged with TV and radio networks for the campaign to be released as a Community Service Announcement. Danny still seeks to spark and progress culture change in the behaviour of men.

He says: "The community is desperate for a change. We all want to see a shift in the way we think, especially in young guys. It's not ok or tough to go out and assault someone. We must all come together to stamp out these shocking and dangerous actions.”

In 2002 Danny started his own promotional company, Green Machine Promotions, and has promoted two of the most respected and highest earning bouts in Australian boxing history.

Danny has experience with both victory and loss – he is eager to share his unique and exhilarating story of success and sacrifice in arguably the most ruthless sport in the world, and to instil the values of a true champion in his audience. 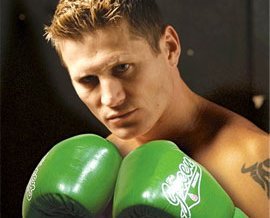