Craig Bellamy is one of Rugby Leagues most successful coaches and continues to lead Melbourne Storm to premierships as their current coach.

Craig chalked up 148 first-grade matches for the Canberra Raiders before he began coaching in ’93. He played for Oberon in 1977-78 before joining Macquarie United in the Newcastle competition. Bellamy was recommended to St George by former Test star Billy Wilson but it was Canberra that gained his services for their debut season in 1982. Bellamy was subjected to several positional changes as the Raiders struggled to be competitive (fullback, winger, five-eighth and lock) but played the majority of his career in the centres. An interchange player in the club’s grand final win over Penrith in 1990, Bellamy spent the 1991 season with Turvey Park (Wagga) before returning to the Raiders for one last season.

Craig’s coaching success speaks for itself; after being appointed head coach of Melbourne Storm in 2003, Craig led some of Melbourne’s most successful campaigns. Melbourne’s 14-4 victory over minor premiers the Cantebury-Bankstown Bulldogs in 2012 was followed closely with subsequent premiership wins in 2017 and 2020. Winning the 2012 title was a grand result for the Melbourne Storm, with Craig’s contribution rightly and comprehensively acknowledged by the rugby league world – redemptive for Melbourne Storm after salary cap issues in the years prior.

After retiring as a player in 1992, Craig set his sights upon succeeding as a coach. He joined the Raiders’ coaching staff immediately as President’s Cup coach which led to a premiership for the team in 1995. He moved to Brisbane in 1998 as first grade assistant coach to Wayne Bennett and earned widespread acknowledgement for his contributions to the Broncos’ grand final triumphs in 1998 and 2000.

Craig is a fantastic speaker on the topics of inspiration, leadership, motivation, sports, team building and teamwork. 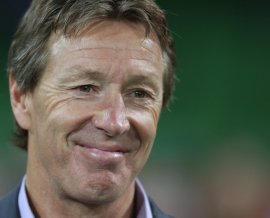