Founder of Braaap and 2010 Young Australian of the Year

Motivated by failure, Brad Smith is an individual who doesn’t take no for an answer and understands that in order to succeed overcoming rejection is required.

After witnessing his parents struggle financially, Brad decided at a young age that he was going to make a difference and create positive change in the world.

At the mere age of 13, Brad began trading share options on the USA share market. Three years later he began his own motorcycle sales company from his backyard.

By the time Smith was 18 he had opened his first retail store and had designed his first motorcycle. With the plan in his mind he headed to China with the goal of finding a manufacturing company that would assist him in building his dream bikes. Brad had no money, no distribution chain and no business knowledge and was forcefully ejected from over 50 manufacturing plants. Rather than giving up, the rejection motivated him and he adjusted both his approach and story to help him land a deal.

Fortunately, on the last day of his two week trip, he struck a deal. Although he had to agree to purchase and sell a much larger amount of bikes than he had expected, Brad had finally found someone who believed in him and was driven to show them that he could be relied on. He learnt quickly how to build a business and how to sell the bikes he had bought.

In 2008, when the Global Financial Crisis hit Australia, Smith found three super retail stores without consumer finance and 80% of his bikes were purchased by customers on consumer finance.

Brad is set out to transform the life of drugs, crime and violence that many may encounter and encourage young people to take up motorcycle riding as a way to receive an adrenaline rush. Last year alone his motorcycle company braaap taught over 1,000 people how to ride the bikes.

Brad Smith is a passionate man whose enthusiasm and excitement is contagious. He is willing to share his tips and tricks in an open and honesty manner to which audiences can relate to.

His speaking topics include: 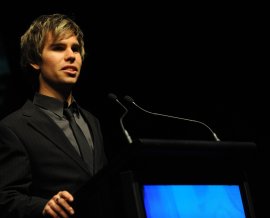