One of Australia's most recognised and entertaining Rugby players

As one of Australia’s most recognised, and, one of the worlds’ most entertaining Rugby players, Ben Tune uses his speed, determination and strength, quick reflexes and devotion to winning to excite rugby fans worldwide.

Educated at St Paul’s College in Bald Hills, Ben played junior rugby for Brothers/Teachers North before going on to play for GPS Rugby. He then played for the Queensland Reds in their inaugural Super 12 season in 1992, making his debut against the Highlanders. Playing in the first season of Super 12, inspired him to continue and make his test debut in the same year, playing against Wales.

In 1999, Tune played a key role in helping Australia to claim the Rugby World Cup, even scoring a try in the final against France.

In 2004, Ben was forced to miss an entire Super 14 season due to injury but was honoured with the title of right wing in the Wallaby Team of the Decade.

He made his triumphant return in 2005, with 6 caps in the Super 12 competition. In May of the same year, Tune signed with the Western Force, finishing his memorable sporting career with the Queensland Reds.

Retiring from the sport in 2007, Ben became CEO of a sport and talent management company, partner in a company which focusses on business coaching, creation and capital and is the owner of a Bank of Queensland franchise. He has also assists in the commentary of many Rugby games, bringing his experience and expertise to comment on the game unfolding before him.

Speaking publically in 2013 about a mental illness, Ben demonstrated strength and determination as he shared his story and spoke truthfully about his own struggles with depression, attempt at suicide and the challenges required to overcome the illness. He shares his story in the hope that it can assist someone else who is struggling to encourage them to reach out. 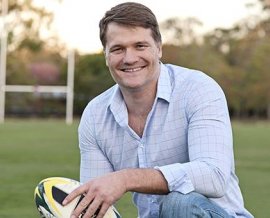