Olympic Gold Medalist, Co-author and Co-founder of Will It Make The Boat Go Faster?

An experienced performance coach, keynote speaker, and best-selling author, Ben’s victory in the 2000 Sydney Olympics has inspired many others to reach for their dreams.

Ben’s journey began in 1998, following a disappointing Rowing World Championships. He and the rest of the GB Eight rowing team realised that their current strategy had to change; otherwise, they would keep getting the same results. They began to approach things more critically, asking the same simple question with every single conversation, decision, and action they took: “Will It Make the Boat Faster?”. With this new approach, they learned the sustainable and dependable techniques that eventually led to their victory in the 2000 Sydney Olympics.

Ben, along with leadership consultant Harriet Beveridge, realised the power of Ben’s story and the parallels between the business world and his experience. In 2011, they released their best-selling book “Will It Make The Boat Faster?”.

In 2012, Ben co-founded “Will It Make The Boat Faster?” a performance consultancy seeking to transform organisational performance by adopting elite sport principles and strategies. He works with organisations to create a high-performance culture, using Olympic-winning strategies that have been proven at the highest levels of sport.

For 16 years, Ben has specialised in leadership and development. He has designed and ran training courses and conferences for numerous organisations. Drawing from his experience as an athlete, he is a performance expert and is passionate about helping others gain success and reach their seemingly unattainable goals.

As a keynote speaker, Ben has shared his inspirational story to over 200,000 people across 50 countries. He has over ten years of experience and is one of the leading keynote speakers in the world. 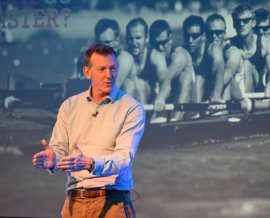