See outcomes from his presentations evident in individuals and teams

Sir Angus Houston is a widely-respected individual across Australia. Retiring in 2011 after 41 years of service in the military, during which he was Chief of the Air Force and Chief of the Defence Force. He is in demand by governments for his extensive skills, wisdom, judgement and leadership in the aim that he can improve their attributes.

In July 2014, Angus Houston was appointed as the Prime Minister’s Special Envoy responsible for leading Australia’s efforts to assist in the recovery, identification and repatriation of the Australian’s killed in the Malaysia Airlines MH17 crash. He also lead the Joint Agency Coordination Centre, organizing the Australian Government’s support for the search into the missing Malaysia Airlines flight MH370.

Sir Angus was named as a Knight of the Order of Australia on Australia Day in 2015 due to his extraordinary and pre-eminent achievement and dedicated service to Australia in the Australian Defence Force, his continued commitment to serve the nation in leadership roles including coordinating national responses to the MH370 and MH17 disasters and his various roles within the community.

Drawing on his previous military career and using his experiences as head of the Australian Defence Force to provide intriguing anecdotes, Houston engrosses audiences, ensuring his strong messages get conveyed clearly and concisely. He enjoys seeing the outcomes from his presentations evident in individuals and helping teams to achieve success.

Sir Angus Houston can tailor his presentations to target areas to ensure that audiences leave feeling motivated and confident. He can speak on multiple topics including general leadership, leadership during difficult times, business resilience, crisis management and the 2014 Ukraine air crash incident and the search for missing Malaysian Airlines plane. 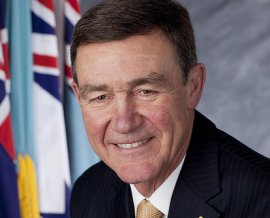