Founder and CEO of Tom Organic speaking openly about her experiences

Aimee Marks is the founder and CEO of Tom Organic, a leading organic personal care brand in Australia. Her passion for the environment and revolutionising overseen products has seen her achieve success and become an inspiration for many.

At the mere age of 18, Aimee grew sick of tampons falling out in her handbag and decided to redesign tampon packaging. Doing some research into tampons, she was shocked to discover pesticides and synthetics used in the hygiene products and decided to revolutionise them. Making them out of organic cotton meant they would not only be better for women’s health but also the environment.

Whilst undertaking a degree in entrepreneurship at RMIT, Aimee started the business from her bedroom, sourcing materials, visiting factories and negotiating deals.  In 2009, TOM Organics officially began and was stocked across the nation in Coles, Woolworths, Chemist Warehouse and independent grocers.

With the tremendous success of Tom Organics under her belt, Aimee decided to venture into baby supplies after having twin girls in 2014. Two years later Tooshies by Tom was launched, offering parents a range of eco-nappies and biodegradable baby wipes.

At just 29, Aimee is an impressive entrepreneur achieving the goal of creating a thriving business that has a positive impact on the environment at the same time.

She has received numerous awards for her work including Telstra Young Business Woman of the Year Victoria in 2013, Australian Organic Young Leader in 2014, topped Smart Company Magazine’s Hot 30 under 30 in both 2015 and 2016 and more recently the Victorian Young Achiever Award.

An impressive and professional speaker, Aimee Marks speaks openly about her business experience, sharing it with her audience and educating them in the process. She is an excellent motivational speaker and business speaker, and suits any event. 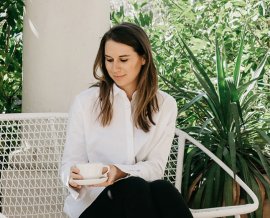