Adam Gilchrist made his debut in the Australian One Day Series in 1997 as wicket keeper.  Renowned as one of the most exciting cricketer’s in the world, the now retired Australia Vice-Captain, Adam entered first-class cricket as a specialist batsman.  As a record breaking Western Warrior keeper, Gilchrist relocated from New South Wales to Western Australia so he could realise his dream.

Gilchrist scored a record breaking 154 runs against Sri Lanka at the MCG in February 1999.  In June 1999, Adam also played an integral role in London when Australia won the World Cup series from Pakistan.  His wicket keeping skills, combined with his expertise at the bat, filled a vital niche as an opener and a prolific run scorer across both the one day and test series.

Combining his skills as a batsman and keeper, Gilchrist was recognised as a trailblazer who opened the batting and kept wicket.  Adam’s prowess saw him selected to lead an Australian XI against the West Indies in Brisbane and an A Team against India in Los Angeles in 1999.

After retiring from cricket, Adam has forged a media career and is a sports reporter for Channel 10 in Perth.  Gilchrist also invest his time in Canteen, as a Vice Patron for the charity that assists children and teenagers with cancer.

Audiences will delight in the down to earth presentation, which will appeal to a broad range of attendees. Adam is motivating and entertaining and presents topics covering the importance of team work and goal setting, whilst giving attendees a tongue-in-cheek, humorous insight to the world of professional cricket. 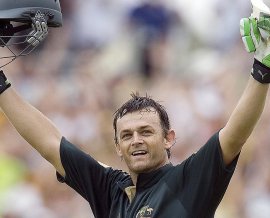