Co-founder and CEO of KeepCup

2013 Entrepreneur of the Year Nominee

Known worldwide for its bright, bold and instantly recognisable reusable cups, KeepCup is a global campaign for reuse. Since launching the world’s first barista-standard reusable cup in 2009, KeepCup is now embraced by reusers the world over, diverting millions of single-use cups daily.

KeepCup is in business for better - a certified B Corporation, living wage employer and member of 1% for the Planet, donating at least 1% of global revenue to environmental causes. KeepCup is committed to becoming carbon neutral by 2025.

Following a successful career as a solicitor at a boutique Melbourne law firm, Abigail and her brother Jamie set up their own chain of cafes across the city. Alarmed by the amount of disposable packaging being wasted, Abigail started her search for a more sustainable and environmentally conscious way to serve food, and the concept of KeepCup soon became a reality.

Abigail has been honoured with an Order of Australia Medal in the General Division, for her years of outstanding service to sustainable design on the Queens Birthday list for 2021. She has previously been an Inductee into the Australian Businesswomen’s Hall of Fame (2015) and received the Victorian HTC Start Up Award from the Telstra Business Awards (2012.)

Abigail has opened offices and warehouses in Australia and the UK, and set up hub operations in the USA to service growing consumer demand in over 76 countries around the world, but the business has stayed loyal to its roots. KeepCup’s HQ is located in the Melbourne suburb of Clifton Hill, where Abigail lives with her family. 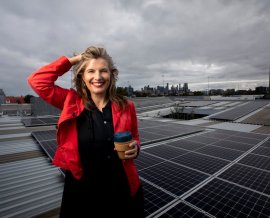