As a highly sought after motivational speaker, Craig Hamilton opens up about his experiences living with Bipolar Disorder.

In 1994, Craig began his career as a broadcaster with ABC Radio and has since commentated on Rugby League, Rugby Union and Cricket at an international level.

In 2000, on the eve of the Sydney Olympic Games, Craig was assigned as a broadcaster. He then he experienced a psychotic episode and was diagnosed with Bipolar Disorder. Having spent 12 days in hospital and embarked on a journey of recovery, Craig has emerged as one of Australia’s most high profile speakers on Mental Health and Lifestyle.

In 2004, Craig his highly acclaimed memoir ‘Broken Open’, which details his account of living with Bipolar Disorder.

Now an internationally sought-after speaker, Craig is open and honest with his audiences, telling them how it is when it comes to mental health issues. His incredible story motivates and inspires those around him, offering hope and encouragement.

Craig spoke as the after dinner speaker at our recent conference His honesty humour and insights into living and coping with mental health had the room in complete attentive silence. His ability to share his own personal journey and explain the impact on his family, friends and colleagues enlightened the room to the devastating effect of mental illness. Craig’s open approach was full of great stories drawn from his experiences in sport and broadcasting, as his work as an advocate in the area of mental health. His advice was practical, non-judgemental and led to a lively ‘question and answer’ session and overwhelmingly positive feedback from the entire team.

Craig’s Keynote was sensational in all respects. I have had numerous people comment on how compelling his story was. I think the fact that he spent a lot of time in a tough industry meant that many in the audience found him easy to relate to.

One of Craig’s key strengths is understanding exactly what is required of him from event organisers, panel/guest speakers and his audience – then working towards achieving these outcomes to help produce a successful end-of-event result. It helps that Craig is an extremely generous, grounded, and all-round nice bloke with endless anecdotes of his personal experiences to share. It is not surprising he has become a sought-after Keynote Speaker across the country impressing and engaging audiences ranging across corporate and community sectors. I have worked with Craig at a number of presentations over the years and cannot recommend his services highly enough. Your event will be in extremely good hands.

Craig’s story is not uncommon, what is special about Craig is the unfiltered, transparent and heart felt way he shares his story. From the moment he began to talk the room was transfixed with genuine interest as they listened to his journey and how he has overcome adversity and continues to manage his health. Craig’s passion for mental health awareness and de-stigmatising the subject comes across strongly in an un-assuming way. Through his conversational style Craig is able to convey that is OK have a mental illness and seeking help is the best thing to do. Craig is a common person who provides a voice of hope for people out there who may be suffering. Thanks Craig, your speech was inspirational

I thought he was brilliant, it is a difficult subject to talk about in a public forum, and everyone will have their own story of how Mental Health issues have impacted them or their family, the more its talked about the more comfortable people become with talking with others which is a positive outcome for all involved.

Craig was a real gift to us. What a great and powerful speaker. He was wonderful, fantastic, educative, funny, I can't say enough. He spoke from his heart and the audience was riveted.

Craig spoke to our workforce of over 350 people and the feedback from our people has been exceptional. Craig's experience with mental illness provides a compelling story, and his willingness to share his experiences and advice has helped raise awareness and discussion on the subject by our employees, the majority of them men. We can't commend Craig highly enough for his honesty and insight into confronting, understanding and managing this illness and its complexities. 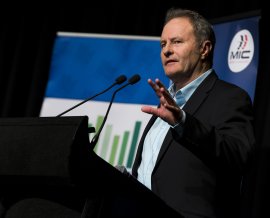