Multi-talented entertainer Tegan Higginbotham will entertain your audience regardless of age and her performance will be remembered long after its conclusion.

Tegan has appeared in several television programs including Molly, Have You Been Paying Attention, The Project, Screen, Thank God You’re Here, Twenty Something, City Homicide and This is Littleton. She has also been in films Oddball and Holding the Man.

Currently, she is starring on Foxtel’s Comedy Channel’s program ‘Whose Line Is It Anyway?’ where her comedic skills and smart wit come in handy to deliver hilarious one-liners and scenes that leave audience members in stitches.

As a comedian, Higginbotham was the youngest veteran participant of the Melbourne international Comedy Festival. Her first solo show, titled Million Dollar Tegan, was a personal investigation into the profession of boxing. The second, titled Touched by Fev, looked at sporting heroes and their suitability to be role models. Both shows scored a 4.5/5 by reviewers. Her third show, which nicely rounded out the sports based trilogy, titled Game Changer, looked at the traditional side of sports when it is mixed with modern society.

For the past five years, she has been part of the legendary sketch comedy group Watson, in conjunction with Adam McKenzie and Liam Ryan. Their shows are high concept, high energy and are often sold-out and award-wining.

Throughout her comedic career, Tegan has been nominated and won several awards in the industry, including a Best Newcomer nomination, two Golden Gibbo nominations and won the Best Comedy Award at the 2014 Melbourne Fringe.

Aside from comedy, Tegan has a strong passion for sport and AFL which has seen her become a regular contributor to The Age Sport. She has also appeared as a panellist on Channel Seven’s Saturday Football and Friday Front Bar, as well as Foxtel’s The Bounce.

Tegan Higginbotham combines her passion for sport and sci-fi with her natural ability for comedy to produce a unique show that entertains audiences. Her quirky and smart personality enthrals spectators and leaves them feeling entertained. 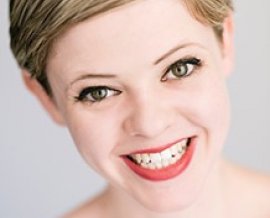