Renowned and respected star of film, TV and the stage.

Sigrid Thornton is one of Australia's most popular actresses.  Sigrid has starred in many of the films which are now regarded as classics of the Australian cinema, including, George Miller's box office hit, The Man From Snowy River, (Fox Classics), The Lighthorsemen, (RKO), directed by Simon Wincer, Slate Wyn And Me, (Hemdale) and The Man From Snowy River II, (Disney – Touchstone).

In addition, she has starred in several very successful television productions including Sea Change, for Granada / Artist Services, The Boy In The Bush for Channel Four / ABC, co-starring Kenneth Brannagh and The Far Country co-starring Michael York and 1915 for BBC / 7 Network.

Sigrid was one of the first Australian actors to have a network series lead on US Television.   Along with recipients, including Clint Eastwood, John Houston and other western icons, Sigrid was awarded the highly prestigious Cowboy Hall of Fame award for best T.V. contribution to Western Heritage for Stray Bullet, an episode of "Paradise" in which her character, Amelia Lawson, is accidentally shot.

At the Peoples Choice Awards,  Sigrid received the Favourite Actress and Favourite TV star awards with Seachange receiving the Favourite Television drama award and the TV Week Logie for "Most outstanding actress in a series".   Sigrid recently received a Mo Award for best performance by an actress in a play for her sell out National tour of The Blue Room.  Sigrid has been nominated for a best actress AFI award for Little Obereron.   Sigrid has just toured nationally in Alan Bennett's play Talking Heads with British actress, Brenda Blethyn.   Sigrid lives in a converted stable with her husband, son and daughter and her two Labradoodle dogs –Billie and Baz. 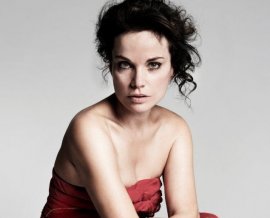