The charismatic Shura Taft is a true and experienced professional known for his way around the microphone. Shura offers witty humor and delivers intelligently to his audience whether it is as a host in the studio, on location or presenting live.

In 2013 Shura secured the host role of the prime-time series The Mole, making its return to The Seven Network after eight years. The Mole has been a successful reality TV show that has been played around the world since 1999.

Shura became the face of Expedia in 2011, giving him exciting opportunities to travel the world. Throughout 2011 and 2012, he featured in their national television, print and billboard advertisement campaign ‘New York on $50’, ‘Thailand’, the ‘South Pacific’ and ‘Vegas’. He was able to draw from his extensive personal travel experience where he went out and saw the world during his gap year, taking a break from his degree in Biomedical Science.

Shura first cut his teeth in the media on radio, an invaluable learning experience learning how to present live to air with his own weekend radio show on Nova.

Shura started his television career as the orignal co-host of Nine’s children’s variety and cartoon show ‘Kids’ WB’ every Saturday morning, a role he contributed to for 5 years since 2006. It was his first break and where he discovered that television hosting is his passion.

Adored by kids and parents alike, Shura then hosted his own game show ‘Pyramid’ on Channel Nine, it aired weekdays for 5 years and 7 series between 2008 – 2012. Over 450 episodes, a credential most hosts cannot claim!

In between these commitments in 2011, Shura co-hosted the television chat show ‘Uplate!’ on Channel Nine’s GO!. Shot live in front of a studio audience they would have live music from Australian and international artists, interview celebrity guests, and cover all the latest entertainment weekly news. He kept busy by also co-hosting ‘Eclipse Music TV’ with Zoe Balbi, a weekly show on Channel Nine and on GO!, presenting the latest in music videos, artist interviews and album reviews. During his time with Channel Nine and adding to Shura’s live television repertoire, Shura has also presented live segments on ‘Mornings with Kerri Anne’ and filled in on ‘The Today Show’ doing live weather crosses.

In 2012 Shura was host of Fox Footy’s ‘The Supercoach Show’, an interactive weekly live footy show for fans of News Limited’s SuperCoach. Shura lead a panel of experts, giving the inside word on what players were delivering the goods, who was struggling, who to buy and who to sell and trade. His passion for sport was also evident when he hosted Cricket Australia’s online ‘Big Bash League’s Cricket TV’ show in 2012. Shura again demonstrated the depth of his sporting knowledge, hosting the show weekly, interviewing cricket players and reviewing the previous rounds games and discussing upcoming games.

Sport is one of Shura’s passions particularly his love for the Hawthorn Football Club, where he established himself as the club’s host of the family club and Club MC for all home match day events at the MCG in 2013, as well as host of their sponsor nights. Shura also hosted home game corporate events for the Melbourne Renegades Big Bash League Cricket team.

Shura has been involved in countless events where he served as MC including The GPO Girl's Night out, Fashions on the Field at both Caulfield and Flemington during the Spring Racing Carnival and has hosted events for Warner Bros, Deakin University, St. Kilda Festival, Aquila, Julius Marlow and Michelle Bridge’s 12 Weeks Body Transformation and more. These events have ranged from 50 people to over 2000.

Shura is also involved with a number of charities most notably TLC for kids where he is an ambassador and has not only hosted their yearly fundraising balls but has also featured in their advertising campaign for their ‘Tracky Dack Day’ fundraiser.

Shura brings a unique energy and enthusiasm to all his performances. He is loved by audiences both young and old and is highly regarded within the industry for his professionalism, integrity and hardworking approach.

We would be glad to assist you with any enquiries you may have regarding booking Shura Taft for hosting your conference or event, please feel free to contact us at any time on 1300 661 904. 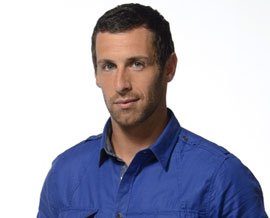