A poised and relaxed host for your corporate event

Scott McGregor has successfully hosted numerous corporate and charity events such as the ‘Moonee Valley Spring Racing Carnival Fashions on the Field’ a few years running, and events for Vodka Cruiser.

Scott is also an ambassador for a number of charities that are close to his heart including The Warwick Foundation, a is a charity that assists young adults living with cancer, and ‘Red Undies Week,’ alongside Tyler Atkins, a charity associated with ‘Kidney Health Australia’ which is making kidney health a little bit cheeky and a lot more fun here in Australia. Scott regularly makes himself available to other charities and lends his support where he can.

On a personal level, Scott has a passion for AFL football, cricket and golf; a sport for which he just became an ambassador for the Australian PGA. He is also a well known face from 30 years of work as an actor, presenter and producer in projects ranging from TV home makeovers to railway adventures.

His numerous other enterprises include tourism, food, home renovations and antiques and collectables. He is a regular MC, speaker and host citing the Local Government and Shires Association, The Rail Tram and Bus Union, Northern Rivers Tourism and The Australia Day Council as some of his clients.

Recently he hosted a series of TV programs on the History Channel including The Stamp Of Australia and Australian Icon Towns but is best known for his DIY expertise and mad antics on Better Homes and Gardens and as the host of the hugely popular Room For Improvement. He also is the presenter of the Bunnings Ladies' Nights in NSW.

As a self confessed railway-nut,  Scott has also presented two series of his own Railway Adventure programs screened here and overseas and was a regular face on the Lifestyle Channel as the antiques and collectables expert and travel guy. His second book for Allen & Unwin titled Big Boys Toys is a funny, quirky collection of stories and photos about men and their 'toys'.

Scott was a regular contributor to the Sun- Herald for many years.  Every year he hosts culture and history tours for the Powerhouse and Queensland museums and is often found at Mudgee where he owns and operates Ruwenzori Retreat, a luxury mountain top tourist hideaway built from Vintage Railway Carriages.

Further  proof  that Scott is a versatile talent is that he is also trained as an actor at NIDA and since 1979 has featured in scores of TV series, films, stage plays and musicals.  He cites starring roles in the ABC's epic mini-series 1915 and the Coral Island and stage shows Bouncers and The Promise as some of his acting career highlights. 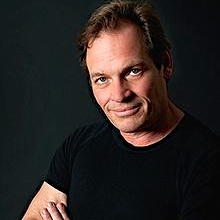