Made up of Hannah and Eliza, the Reilly Sisters are creators, working as producers, writers, directors, actors and presenters across film, television, and theatre.

Growing up on a cattle farm in rural Australia, they went without television reception, turning to creating their own plays for entertainment.

Since then, the sisters have gone on to create bold comedy across multiple platforms, receiving rave reviews for their female focus.

In 2017, the Reilly Sisters co-created, wrote and starred in ABC1’s ‘Growing Up Gracefully’. The six-part comedy series, which drew its ideas from double standards existing in etiquette books for women, went on to be nominated for a Logie Award as well as receive critical acclaim.

A year later, they produced, co-wrote, directed, and starred in their multi-platform series, ‘Sheilas’, shining a light on the amazing yet forgotten women of Australian History.

In 2018, they co-wrote, directed, and performed their first original comedy musical ‘Yarramadoon: The Musical’ at Sydney’s Belvoir St Theatre to sell-out crowds and an extended season.

As two of Australia’s most in-demand voices, they were recently named in TV Week Magazine’s ‘Next Gen of Women in TV’.

Fantastic MC’s and hosts, the sisters make a hilarious addition to any event. 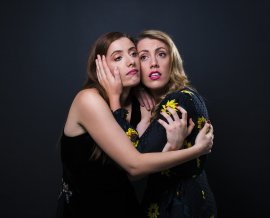