Myf Warhust is a refreshingly warm and down to earth media presenter and MC who is perfectly comfortable working with people from all walks of life. Myf is at home in front of an audience, with her bubbly personality, vivacious smile, quick wit and impressive intelligence  ensuring events flow smoothly and guests are immediately at ease.

Myf has worked in and around the music/arts/entertainment industry almost since she arrived in Melbourne. She worked for some time as a journalist, providing arts and music stories for The Age and Inpress magazine, which meant going out every night to venues to watch bands or young hopefuls eager to see their names in print. Such was her success at InPress that in 1999, Myf was appointed Managing Editor.

Myf was introduced to radio as the showbiz reporter on Merrick and Rosso's Triple J Drive show in 1999. When Merrick and Rosso moved on to present the Breakfast show on NOVA radio in Sydney, Myf moved into a full time gig at the Js, hosting the Saturday night request show in 2000 before landing the afternoon shift in 2003.

Myf has also hosted Triple J's weekday lunchtime shift and the breakfast show with Jay and the Doctor. In 2009 she hosted the breakfast show on 105.1 FM Triple M with Pete Hellier. Myf's biggest claim to fame came as  team "captain" on the ABC's genial Wednesday night quiz show Spicks and Specks, the program of choice for about 1 million Australian viewers.

Myf regularly participates in industry talks, conferences and events. She is also an experienced MC for all types of organisations and a spokesperson for different initiatives.

​Submit an enquiry or contact us to book Myf Warhust for your next event. 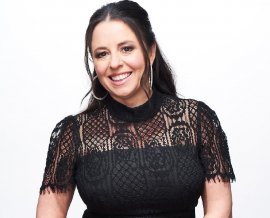