Mark Humphries is best known for his viral political sketches on ABC’s 7.30. On Network Ten, he was the host of the quiz show Pointless, and has also made appearances on Show Me The Movie, Hughesy We Have a Problem. He presented a weekly comedy segment on ABC News’ The World in 2018, and has been a regular guest on ABC’s Insiders since 2016.

Cutting his teeth as a presenter on ABC2’s nightly comedy show The Roast (2012-14), Mark presented a rapid-fire headlines segment which was ultimately picked up by The Guardian in 2015. He joined SBS Viceland’s The Feed later that year where he began his trademark political sketch work.

On radio, Mark guest hosted The List and TV Club on ABC Radio National in 2016, and co-hosted Radio Chaser for the Triple M Network in 2017.

He co-authored the satirical book, The Chaser’s Australia: the 100% error-free guide to Austria. He has also contributed to The Chaser Quarterly 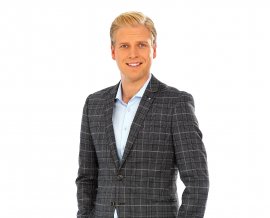