A prominent figure in broadcasting and television for over 5 decades

Mal Walden has been telling it like it is for over five decades.  Starting his career in broadcasting and television in 1961 at a Warrnambool radio station 3YB where he was the breakfast announcer for three years.  From there he moved across the Bass Strait to Tasmania where he joined 7EX and later moved Channel 9 in Launceston. Between 1966 and 1969, Mal was a general announcer and news reporter for Melbourne's 3DB.

Taking a year off in 1969 Mal backpacked around South East Asia and Europe spending six months on a kibbutz in Israel, where he produced his first radio documentary.

Returning to Melbourne in 1970, Walden joined HSV-7 where he hosted a number of shows, including the popular program Jeopardy. In late 1971 year he began a journalism cadetship with Seven. One of the highlights of Mal's seven years as a reporter at the station was his scoop as the first reporter at the scene of Cyclone Tracey which decimated Darwin between December 24 and 26 in 1974.

In 1978 Walden became the first working journalist to be appointed a senior television presenter, a trend that has since been adopted by most other Networks. In April 1987 Mal not only read the news, he made the news. His public sacking from HSV7 by the Fairfax Sydney Television Group led to public protests, staff walkouts and a plunge in news ratings. His immediate move to the TEN Network saw a record news rating of 40 and so began a long association with TEN.

A noted highlight of Walden’s career was covering the Melbourne bid for the Olympic Games from Tokyo - coverage praised by the Prime Minister himself.

In December 1995,  Mal was appointed newsreader of Network Ten's 5pm Melbourne News.  In 2006 Mal became the longest continually serving face on Australian television and in June 2011 he celebrated 50 years in the Australian media.

Mal was the perfect speaker for the launch of our Seniors Festival. He took the 140 guests on a journey down memory lane with his wonderful stories beginning as a 16-year-old right through to his retirement years. He had the whole room captivated. 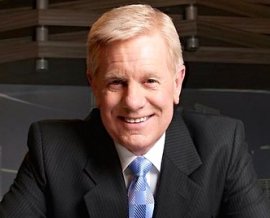