Kristie Mercer allows people to get to know her pretty quickly. A well-known radio personality, she continues to make a name for herself in the entertainment industry for her quick wit, honesty and courage in her vulnerability. Kristie opens up parts of her life most would shy away from - from her battle with booze, her constant struggle to ‘adult’ to her recent heartbreak at ending of her nine-year relationship. Kristie connects with female audiences of 18-40 across all platforms for her real, raw and fearless attitude to life.

Mercer has lived a lot of her life behind a microphone, first as a professionally trained singer - she competed on Australian Idol in 2006, plus spending most of her childhood years writing and recording original music in addition to a year of majoring in music performance. Kristie decided to keep the microphone but swap the high notes for LOL’s and cut her teeth in the radio industry at the young age of 20.

Replacing Hamish and Andy on Townsville’s 106.3FM, Kristie was quickly recognised for her quirky sense of humour and natural ability, so was snapped up shortly after for her first breakfast radio show at Gippsland’s TRFM. Regularly recognised as an up-and-comer of the industry, she scored herself an ACRA (Australian Commercial Radio Award) before being poached for the breakfast show at Albury’s Star FM and later the Central Coast’s Sea FM. Her humour, quick wit and personal delivery garnered a loyal audience wherever she went.

Kristie then shot to our ears alongside BFF Stacey June due to their highly successful 'Thinkergirl: The Podcast', originally creating content that wasn’t suitable for your average radio show.  Sparking a true girl group cult following online it quickly grew to become one of the most successful podcasts in the country. Followed by LIVE recordings of the show to sold out audiences in Melbourne, Sydney, Adelaide and Brisbane resulting in millions of downloads and viral videos on the platform the duo have created together. This led to a National radio show on the KIIS Network from 7pm- 9pm weeknights for 2 years.

Kristie writes regularly for news.com.au and Cosmopolitan and has been published on the New York Post and UK’s The Sun. She appears regularly on Sunrise, The Project, and The Morning Show. The Thinkergirls were a fill in on National Drive for Hughesy and Kate on the KIIS Network and presented a regular ‘The Thinkergirls Segment’s’ on Kyle and Jackie O. 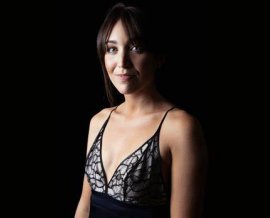