Glenn Ridge is an impressive speaker for a variety of events. With an uncanny ability to fit any role he is desired for, he is sure to impress your guests.

Starting his extensive media career as an announcer at Bendigo’s 3AW, Glenn popularity with the community quickly flourished. In 1980 Glenn became involved in television, joining TV8 in Central Victoria as the Host and Producer of ‘Breezin’, a weekly one hour music video program.

In 1994, Glenn formed qmediaproductions, which is now called qmediagroup, producing and presenting over 1000 hours of live and pre-recorded television programs between 1985 to 1989. Qmediagroup has now fully funded and produced fourteen documentaries which have aired on the Nine Network.

For his extensive work within the entertainment industry, Glenn has been honoured with multiple awards including the 1986 Logie for ‘Most Outstanding Contribution by a Regional Television Station’ for his program ‘Kids Only’. He also was awarded with a Certificate of Commendation by the Television Society of Australia in both 1986 and 1987. In 1988, The National Jaycees announced Glenn as one of their Most Outstanding Young Australians.

Glenn is also the Executive Producer and presenter of The Care Show and The Boatique, which aired on the Nine Network.

With a keen interest in motor racing, Glen has competed in several races including Targa Tasmania, Western Australia’s Targa West and the Australian Safari.

MC or host, Glenn Ridge is a professional speaker who is fantastic for any event. 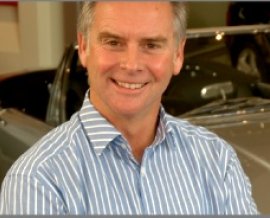