Passionate about presenting and communicating with an audience

Born in country Victoria, Presenter and Producer Emma Vosti (nee Davenport) grew up surrounded by fresh air and farm animals. Her parents, professional horse trainers both competed in rodeos around Australia and the world; it was this environment that her love of all things adventure and travel were born.

With a degree from Deakin University in Public Relations and Journalism under her belt, Emma has an incredible insight into the industry. Her passion for presenting and communicating with an audience is the driving force behind her career in the media covering all things Sport and Lifestyle.

Widely regarded as one of Australia’s brightest emerging talents; Emma’s diversity and down to earth charm has seen her cover a range of different genres from chatting to celebrities on the red carpet to holding her own alongside some of Australia's most elite athletes. Most notably she joined Seven's Exclusive Coverage of the 2018 Winter Olympic Games and hosted the Network's highlight show for the 2018 Winter Paralympic Games. Emma also hosted the 2018 late night Wimbledon coverage alongside Geoff Masters and was part of Seven's Australian Open tennis coverage for three years.

From the snow fields in Korea to the beaches of the Gold Coast, 2018 was Emma's biggest year yet. Being part of some of the best moments in Aussie sport during the Commonwealth Games coverage as she brought viewers all the colour of the Games, as well interviews with athletes and live crosses from events.

Her debut with Seven was as a reporter on their award winning Rio Paralympic Games coverage in 2016 and since then Emma can be regularly seen across Seven's Horse Racing coverage throughout their Spring and Autumn carnivals.

With a keen eye for detail, Emma's skills behind the camera include script writing, research and producing. Her credits include; 2018 Brownlow Medal, 2018 Winter Olympics, 2018 Commonwealth Games, 2015 and 2016 Melbourne Cup Carnivals, 2016 and 2017 Australian Open and the 2016 Olympic Games in Rio de Janeiro, Brazil. A highlight in 2016 was travelling to Southern Uganda for Seven's AFL Coverage in partnership with the Cotton On Foundation as Geelong Cats players experienced first hand just how their fundraising efforts support local children. ​Emma’s warm personality and confidence also lends itself to being a great MC for events. 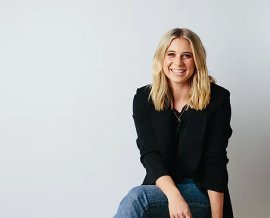