After 20 years in corporate entertainment in varied roles from performer to creative consultant, Col brings a unique level of understanding to the role of MC particularly through his ability to see through the eyes of the client. Clients regularly comment on Col’s extraordinary attention to detail and understanding of company sensitivities and dynamics. For Col, talking into the mic is only part of the job. Ensuring that all parties are comfortable from the event manager to the CEO and of course audience, is vital.

His unique understanding of your event and audience comes from his extensive experience as a stand up comedian, character comedian, street performer, comedy writer, voice over artist, corporate impostor, musician and creative consultant.

Col is also adept at more formal roles such as moderating in-depth panel discussions, a comfort he achieves through detailed research prior to the event.

A great talent on the stand-up comedy club circuit, Col’s infectious style has seen him in high demand with promoters as ‘the host you can count on every time’. Col loves nothing more than creating a personalized show for you and your guests, only limited by your imagination.

Col became a founding member of Wacky Entertainment in 1996. During Col’s time with Wacky, which continues today, he has clocked up thousands of corporate and festival performances all over Australia and South East Asia including The Logies (white carpet warm up), the ’06 Commonwealth Games Athlete’s Village, the Australian Open Tennis 1999-08, the Australian Grand Prix 00-08, Citibank (Greece, Japan, Spain), Star Hub Launch Singapore, Hong Kong Christmas celebrations and the 2006 V-Power national launch roadshow for Shell Australia.

In 2007 Col performed his solo stand-up show ‘Like a Fish out of Water’ in the Melbourne International Comedy Festival followed by 2008 MICF and ‘Obsessions’ at the 2009 Adelaide Fringe Festival. 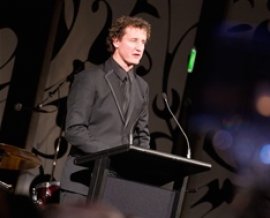