An entertaining, professional and charismatic MC.

Chris Parsons features on Queensland Weekender each week travelling around and showcasing Queensland.

In his own words, Chris Parsons spent his early years on the Gold Coast developing his BMX and yo yo skills, before moving to Brisbane for high school and university.

With journalism degree in hand, Chris jetted overseas for a boys' own tour of France and Spain in a 1974 VW called 'Chad'.

Chris returned home to pursue a career in the media industry, and claims he had many, "oh so many" auditions, before landing a job on a Gold Coast lifestyle show.

This lead to a presenting role on the Briz 31 car show 'Rev Central', despite the fact that Chris didn't know a welsh plug from a transformer.

He's tried every job from labourer to bathroom supplies rep to perfume sprayer at Myer, but since being a part of Queensland Weekender, Chris has 'never been happier'.

Chris' perfect Queensland escape? "If it's in the sun, I'm happy, but plonk me down at Burleigh heads with friends and a barbecue and you'll never see a smile so wide. Having said that, put me on a boat in the tropical north and I sure won't complain," he said.

Chris is an entertaining, professional and charismatic MC. 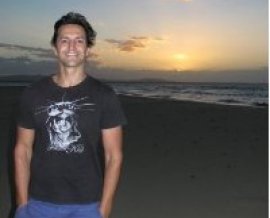