As a journalist and reporter, Anna Daniels is known for connecting with audiences through her warmth and humour. She is best known for delivering stories on Network Ten’s ‘The Project’, where she strives to champion the stories and characters of rural and regional Australia.

In 2016, Anna’s debut romantic comedy novel ‘Girl In Between’ was shortlisted for the Vogel Award.  The novel has become one of Australia’s bestselling debut novels of 2017, as well as being converted to multiple languages and an audiobook.

Anna, in her career as a journalist, has written, presented and produced content for some of Australia's and the UK's highest rating programs. She has been seen on ‘The Project’, ‘Queensland Weekender’ on Channel 7 and ‘Landline’ on ABC1, as well as heard on Red Symons Breakfast Program on ABC Radio Melbourne, and the BBC One series John Bishop’s Australia.

Her passion for comedy saw Anna co-win the ABC’s 'Comedy Segment of the Year Award' for her interview with Russell Crowe. She continued down the path of comedy to co-create and act in the ABC's 'Tough at the Top,’

Anna is available as a speaker, MC or interviewer, and is an engaging, entertaining and down-to-earth choice for any event. 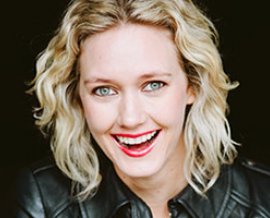