One of the most successful rugby coaches

As one of New Zealand's most in demand speakers, Sir Graham Henry is known for his coaching skills, having coached the All Blacks to glory in the 2011 Rugby World Cup, as well as being awarded Coach of the Year at the IRB awards.

Finishing his career at the All Blacks as one of the most successful coaches of all time, Graham had coached the team to 88 wins in 103 Tests for a winning percentage of 85.4 percent.

Graham has previously worked as defensive co-ordinator and technical analyst, as well as a coach and headmaster at a secondary school.

Currently, Graham works with some of New Zealands leading companies, including Downer, Farmlands, Reckitt & Benckiser and the Giltrap Spencer Group, where he focusses on team building, culture and leadership development.

Graham is a regular speaker, with his presentations covering the topics of succeeding in a high-performance environment, team culture, motivation, team development, and leadership. 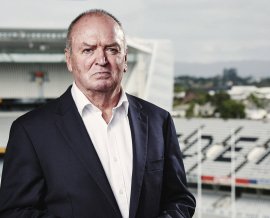