Listen to Mark tell of his inspirational and entertaining sporting experiences.

As former captain of the New Zealand Men's Softball team, Mark Sorenson helped lead his team to victory in three world championships. Captain of the team between 1989 and 2001, Mark went into retirement, before joining the 2004 season resulting in another Championship win.

Mark is a highly in demand sportsman, having been selected 12 times to the All World Team by the International Softball Congress, been elected six times to the ‘All American Team’ at the USA Nationals and voted the tournament’s Most Valuable Player in 1990 and 1992.

Besides sports, Mark has held a number of sales, promotions and project management positions. He has also worked as a youth worker and sports ambassador for New Zealand Police and Sport Wellington region.

He speaks passionately on the topics of motivation and inspiration, goal setting, success and team building. 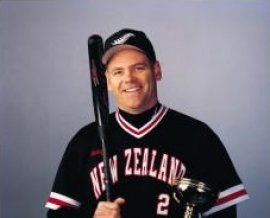