Dr Paul Scully-Power is an integrator, strategist and orthogonal thinker and is Australia’s first astronaut. He has a unique international background in Industry, Government, Defence, Space and Academia in the US, UK, Australia, and NZ, and is well known for his network of people and institutions around the world. He has broad expertise in defence, national security & intelligence, aviation & aerospace, remote sensing, cybersecurity, and systems analysis & ICT.

A leader in applying technology, Paul is currently engaged in nano technology, big data analytics, smart sensors, microsatellites, UAVs, artificial intelligence, and defence programs. He has been Chairman, President, Executive Director, CEO and CTO in the corporate sector, and has served with the Royal Australian Navy, the UK Royal Navy, the US Navy, and NASA, the Pentagon, US Military Intelligence and the White House, where he was Head of a Government-Industry partnership for the design, manufacture, and operational deployment of a highly advanced, ultra-broadband communications system.

Dr Scully-Power has led and managed many high-tech, defence and security programs. He held executive appointments under Presidents Carter, Reagan, Bush, and Clinton, and was a major contributor to the US Navy’s warfare appraisal and surveillance strategies and its ASW Technology Plan. He held the Distinguished Chair of Underwater Acoustics in the US Navy, and was a Research Associate at the Scripps Institution of Oceanography, Chairman of Membership of the Connecticut Academy of Science and Engineering, President of the Navy’s Fort Trumbull Federal Credit Union, and served on the Universities & Colleges Accreditation Board and the US Office of Naval Research S&T Funding Board. He was the inaugural President of the UN International Commission on Space Oceanography, and discovered the phenomenon of ocean spiral eddies.

From 2011 to 2015 he was a senior advisor to the US Government in Washington, DC, including INSCOM, NVESD, MACE, and ARIN, and to defence and intelligence companies OpsWare, nCap and Exelis, and now serves on the DC based Edgemore Consulting Board of Advisors.

In Australia, he is the Co-Founder of The Ripper Group (drones for the saving of lives), and is the NSW Premier’s Ambassador for the Space Industry. He serves on the Australian Defence Department External Review Board, the NSW Smart Sensing Network Board, and on Advisory Boards for the Royal Flying Doctor Service, Slyp, and the Water Initiative for Africa.

He worked directly with the Royal Navy during Operation Corporate in the South Atlantic, and was inter alia an advisor to Hydrographer RN, and a liaison officer to the Chairman JIC, FOSM and CinC Home Command.

Dr Scully-Power qualified for high altitude full pressure suit flying at Edwards AFB, and was a flight crew instructor in the Astronaut Office, Johnson Space Center, becoming Australia’s first astronaut flying aboard Challenger on the 13th mission of the Space Shuttle. Dr Scully-Power is a Doctor of Science in Applied Mathematics and has published over ninety international scientific reports and journal articles, including the Bakerian Lecture of the Royal Society. He is a Fellow of the Royal Aeronautical Society, Liveryman of the Honourable Company of Air Pilots, Freeman of the City of London, Fellow of the Australian Institute of Company Directors, Senior Fellow of the International Strategic Studies Association in Washington, DC, and a Life Member of the Space Industry Association of Australia.

Dr Scully-Power commenced his career as the inaugural Head of the Royal Australian Navy’s Oceanographic Section, and qualified as a naval diver. He has served as Chairman of Australia’s Civil Aviation Safety Authority, Chancellor of Bond University, and as the inaugural Chairman of the Queensland Premier’s Science & Technology Council. Dr Scully-Power was elected a Councillor of the Australian Institute of Company Directors for eight years, and was a Director of the Australian Trade Commission for five years. He has had extensive involvement in community groups as Patron of the Australian Aviation Museum, the Royal Australian Navy Laboratory Association, and the League of Ancient Mariners; Senior Vice President of the RAN Naval Warfare Officers’ Association; and as a Director of the Australia Youth Trust. He has served on the Australian-British Chamber of Commerce and the American Chamber of Commerce in Australia.

His awards include the US Navy Distinguished Service Medal, NASA Space Medal, Casey Baldwin Medallion of the Canadian Aeronautics and Space Institute, US Presidential Letter of Commendation, US Congressional Certificate of Merit, United Nations Association Distinguished Service Award, Laureate of the Albatross in oceanography, Order of the Decibel in acoustics, and Australia’s highest aviation award, the Oswald Watt Gold Medal. He is a Member of the Order of Australia and a Grand Officer of the Order of the Star of Honour of Ethiopia. A life-size oil painting of Dr Scully-Power hangs in the National Portrait Gallery.

A life well lived - so far!
Breakthrough Technologies
Implications of cyber for security, warfare and the fabric of the nation state
Merging Relativity and Quantum Mechanics
Space 2.0
Space flight and what you can see from space
The emerging drone ecosystem, artificial intelligence and algorithms for everything 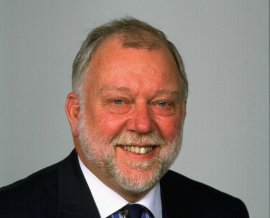