Dame Jenny was New Zealand's first female Prime Minister and today is a director, international speaker, mentor and advisor. She is highly skilled in predicting and pinpointing business and political trends around the globe. Her fiscal fortitude is said to have paved the way for a subsequent decade of economic success and social reforms in New Zealand.

As PM she led a Coalition and a Minority Government in the first NZ MMP parliament. She bought NZ through the Asian Crisis and returned the economy to growth of over 4 %. As PM, she chaired APEC in NZ in 1999, the first woman to do so. She retired from NZ politics in 2002 and returned to the private sector while still retaining her intense interest in the development of leaders here in NZ and globally.

After retiring from politics, Dame Jenny continued her work in economics and returned to the business world, eager to work with leaders from around the world to help shape their strategic leadership and move towards success. Her passion for emerging economies sees her a regular visitor to China and holds board positions on a number of Think Tanks including the BOAO Forum for Asia and the International Finance Forum.

Dame Jenny became the Vice President of Club of Madrid in 2009 and still serves as a Board Member today.  The Club of Madrid is a group of  plus former Presidents and Prime Ministers who give their time and share their expertise to promote democracy worldwide.  Her business acumen has been utilised to sit on the board of many businesses across the globe and she is currently a member of the World Women’s Leadership Council and Global Leaders Council for Reproductive Health.  Dame Jenny is also a Patron and Trustee of several major charitable organisations, both in New Zealand and off-shore and has been a member of the British Privy Council since 1998.

In 2009, Dame Jenny stepped into the Vice-President Role of Club Madrid, and she still serves on their board today. Club Madrid is made up of around 100 former Prime Ministers and Presidents who set aside time to strengthen democratic institutions and counsel on the resolution of political conflicts in two key areas: democratic leadership and governance, and response to crisis and post-crisis situations.

Dame Jenny is also an advocate and an inspiration for women in leadership and has been the chair of Global Women NZ and is currently the Co Chairman of Champions for Change.

Dame Jenny is widely considered around the globe to be a formidable leader, a global economics expert and an authority on Global mega trends. She has a vast and rich knowledgebase to draw upon and is eager to share her tools for success. Dame Jenny seeks to motivate and inspire the leaders of the future.

Dame Jenny will tailor her presentation to meet the organisational needs of your Company to encompass goals and values. She can offer expert advice and insights across topics including:

Dame Jenny is a highly engaging speaker equipped with the capabilities, tools and knowledge to provide a powerful and insightful keynote address, instilling in the audience a passion and vigour for success. 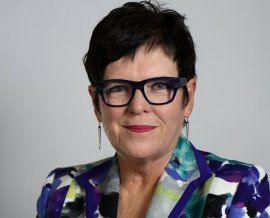