The first Canadian Commander of the International Space Station

Chris Hadfield is the first Canadian Commander of the International Space Station, achieving his childhood dream of going to space.

As children, we are often told to ‘reach for the stars’, and in Chris’ case, he really did!

Over his career, Chris has learnt valuable lessons on commitment, intelligence, hard work and sacrifice, leaving him with riveting stories and powerful advice.

Chris presents passionate and inspiring talks, using his past experiences to speak on leadership, teamwork, collaboration, science, and technology, both in space and on Earth.

A Musical Evening with Chris Hadfield
Colonel Chris Hadfield shares a selection of stories, images, songs, and ideas in a musical presentation that delights audiences of all ages. Performing songs like his evocative Beyond the Terra, which looks away from the land to the skies, Colonel Hadfield ties his presentation together with incredible tales from over the course of his career, including his experience as the ISS commander. Suitable for audiences big, small, and in between, Chris customizes his performance to meet the needs of all kinds of clients.
Extreme Leadership
Colonel Chris Hadfield has over 25 years in the Royal Canadian Air Force and 21 years with the Canadian Space Agency and NASA, and developed and honed leadership theories and practices which have taken him to the very top. In his talk on Extreme Leadership, Chris outlines fundamental theories and original insights, interspersed with examples from his own experience, including: being a US Navy Top Test Pilot, NASAs Director of Operations in Russia, National Outdoor Leadership School Mentor, NASA Astronaut Chief of Space Station Operations and International Space Station Commander.
Managing Complexity and Change
Commanding a spaceship during an emergency has the highest of stakes: human lives, irreplaceably expensive equipment, and worldwide scrutiny. Spaceflight is an unforgiving business, with industry success riding on every launch and critical event. Colonel Chris Hadfield held multiple leadership and management positions during his 21 years in the astronaut corps, navigating tragedy, delays, program changes, and much more. Using examples from his tremendous career, he illuminates the necessity for both preparation and reaction to complex change.
STEM
Colonel Chris Hadfield has worked with countless students and teachers, from preschool to post doctoral, for decades. Speaking in schools and at education conferences throughout his 35 year career as an engineer, pilot, and astronaut, his rare mixture of personal experience, memorable ideas, and a warm, fun, interactive style has influenced a generation. Chris strongly believes in the necessity to give every student the tools and the inspiration to succeed. His face and accomplishments are in Canadian science textbooks, as both a role model and clear example of where STEM education can lead. Using real world examples from his unique experiences, he enables audiences to see beyond their normal horizons, and helps give them the tools and ideas for personal growth and achievement in learning.
The Sky Is Not The Limit: Inspiration In Success
Drawing on his experience from over two decades as an astronaut, Colonel Chris Hadfield shares multiple stories and examples that highlight the fundamental necessity of inspiration as a vital component of success. 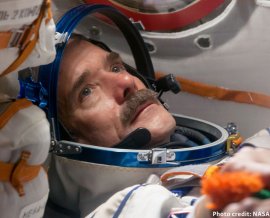