Patrizia Cassaniti, is Christopher’s mum, who unfortunately was tragically killed after a scaffold collapsed on him at a jobsite in Macquarie Park, Sydney

Patrizia Cassaniti, is Christopher’s mum, who unfortunately was tragically killed after a scaffold collapsed on him at a jobsite in Macquarie Park, Sydney. He had only just turned 18, 4 days prior and had dreams and goals that will never be fulfilled, because of a regular complacent decision that was made that took his life. His death rocked the industry to its core and ever since, Patrizia has become a safety advocate and has been on a mission to get in front of as many workers, to deliver her compelling message to shift complacency and resonate with worker on a personal level, so they can make their families the reason why they go to work safe every day.

Her aim is to give workers the courage to speak up in an industry that is very intimidating, especially when they feel they are in danger, without feeling victimized or have fear of losing their job. Her talks include a video of the incident that killed her son, although can be confronting for some, but brings the reality of what tragedy looks like, home. It is a very personal message that comes from a mother’s grief and plea for safer workplaces. She reminds everyone that a tragedy at work is never an accident, it is always an incident waiting to happen, because of complacent decisions made that lead up to it.

When Christopher died, the impact it had on the construction industry was massive, not only was it devasting to the family and friends, but caused a ripple effect to many other workers and beyond, he left behind a legacy that his mother will continue, so that Christopher’s name will always be remembered in the name of safety and be his voice, which will echo in workers for a very long time.

Together with SafeWork NSW she has helped implement a safety speak up app, https://speakup.safework.nsw.gov.au/  that allows workers to speak up anonymously. Her persistence and drive will reign new laws in honour of her son, Christopher, #christopherslaw will see Industrial Manslaughter with higher penalties and consequences to be introduced in NSW, as a deterrent to unsafe work practices. She made a promise to do all she can to make sure that NO AUSTRALIAN WORKER SHOULD EVER GO TO WORK AND DIE.

Aware that her road is long and difficult, she stands her ground because our current laws will never bring her son justice nor will she be able to bring him back, but if she can save a life in his honour, she is happy. Her courage, inspiration and resilience is already bringing change to an industry that very much needs it.

TOUCHED BY CHRISTOPHER is a foundation that was founded together with her husband Rob and raises money to help families who have lost a loved one in Construction, by providing them with 3 months’ worth of groceries and pay for outstanding utility bills, so they can grieve without the everyday burden, because when someone die the bills do not stop and most of the time, the person who dies is the bread winner.

As a small business owner in the construction field, you constantly worry about every single aspect of your operation and ride all the waves in what can definitely be an emotional rollercoaster! For the better part, most of us can tend to believe that we are in control and that the things we can’t control or believe we can’t, we just tend not to think about them as a major accident or safety breach! Sure we all know about safety, WH&S, PPE etc, but we can all be resigned to just hoping that it won’t happen to us. For this very reason when I came across Mrs Patrizia Cassaniti’s work as an educator and warrior in safety, I knew that if there ever was going to be a message heard it would be hers, and up to date I have already seen a massive difference in attitude towards all things safety within our team. Not that our team were reckless or misinformed before, however the platform she served definitely struck a nerve and my team and customers are already better for it. I would strongly encourage any business of any size to be a part of her movement in pursuing a safer workplace for all.

Patrizia Cassaniti, you are an amazing woman. I thank you very much for a very heartfelt delivery of what can and does happen in the workplace, the emotion was overwhelming for myself and many others, but you hit the mark that made myself and others in the team think about their actions within the workplace I thank you with all my heart. Love and respect to you Patrizia . 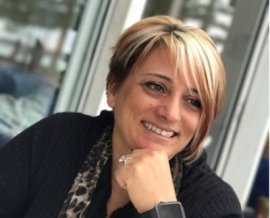