Sharing the Nobel Prize in Physiology or Medicine in 1996, Professor Peter Doherty is known for his joint discovery of how the immune system recognises virus-infected cells.

Named Australian of the Year in 1997, Peter has since worked at both St Jude Children’s Research Hospital in Memphis and the Department of Microbiology and Immunology at the University of Melbourne.

With his research focussed on the defence against viruses, Peter regularly spends his time lecturing, authoring articles and delivering radio interviews.

Graduating from the University of Queensland in Veterinary Science, Peter became a veterinarian, before moving to Scotland and earning his PhD. As the first veterinary qualified Nobel Prize winner.

He has also authored several books, including ‘A Light History of Hot Air’ and ‘The Beginners Guide to Winning the Nobel Prize’. 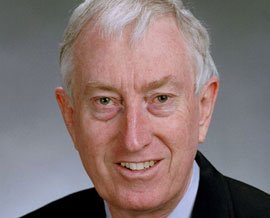