Former Lord Mayor of Adelaide, passionate about cities and innovation

Passionate about cities and innovation, Stephen is one of Australia’s best-known and respected contemporary Urban Planners who consults internationally on future city trends, urban innovation, leadership and creating positive change.

He is considered an international specialist on the future citizen and the relationships between people, technology, infrastructure, society, cities and quality urbanism.

Stephen has worked, researched and attended events throughout Australia and in New Zealand, Taiwan, Europe, the Middle East, China, India and the USA.

During his time as Lord Mayor in Adelaide (2010-2014), his emphasis on collaboration with the private sector and State Government delivered many outcomes and saw Adelaide recognised internationally as an innovative destination by Lonely Planet, National Geographic and The New York Times. His acheivements within the role of Lord Mayor include a world class city-wide Wi-Fi network, environmental initiatives, redevelopment of the city's primary retail and public spaces, a new city structure plan and development plan to create housing diversity as well as many other outstanding acheivements in the city.

Prior to being Lord Mayor, Stephen worked in the South Australian Government and Parliament, in Local Government and internationally as a planner, researcher, educator and speaker. His planning experience is exceptionally diverse; from strategy to implementation on many large projects dealing with most land use types and a diverse range of environment, economic, community, design and development issues.

Governance Futures
Including government and infrastructure futures and the citizens of the future
Great Cities
Including creating places for people, great streets, great cities and health cities
Infrastructure Futures
Including water and energy futures and infrastructure 2050
Leadership
Understand strategic planning, working with elected members and creating the future as well as self and strategy
Smart Cities and Citizens
Discover the effect of AI on cities, planning for smart cities, share economy and cities and the future of tourism
Transport Futures
Discover the future of transport including road futures, autonomous vehicles and EV's and city planning 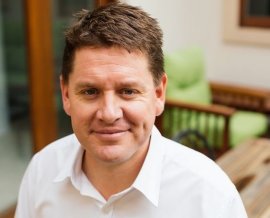