Future Crunch are a group of scientists, artists, technologists and entrepreneurs who believe that science and technology are creating a world that is more peaceful, transparent and abundant.

Working in the Future Crunch team, Steven is a maker, digital technologist, facilitator and physicist. He works at the intersection of digital technologies and community building, and is passionate about strengthening teams and organisations to work in new ways in the 21st century.

He completed a PhD in Physics at the University of Sydney in 2006, designing optical fibres using genetic algorithms, and spent four years at University College London as a postdoc simulating blood flows in the human brain. Since 2012 he’s been the Head of Research Platforms at the University of Melbourne, developing strategies and implementing projects to drive the future of data-intensive research. He is also a woodworker, and runs a custom design company, Weld and Fathom.

Future Crunch specialises in dynamic, uplifting, visually spectacular keynote presentations. At the heart of every Future Crunch presentation, is an exploration of the intersection between optimism and the creation of a more abundant and peaceful planet. They are able to present current and tailored content to suit and audience and industry. 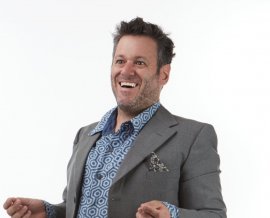