One of Australia's most respected investment experts

Robert Gottliebsen is one of the nation’s most respected investment experts and is known for his commentary on the Australian business and finance industries, having been in the sector for over 30 years.

Robert has been presented several awards for his journalistic work, including being named as Australian Journalist of the Year and the Walkley Award.

In 1981, Robert was the founding editor of Business Review Weekly, heading the magazine for the next nineteen years.

In 2005, Robert co-founded the Eureka Report, as well as founded Business Spectator, a business news and commentary site.

As a highly respected commentator, Robert is known as the journalist to turn to for business and investment. 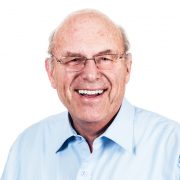