Sean Ashby is founder and managing director of the highly successful Australian underwear and swimwear brand, aussieBum. Combining his passion and drive with a unique idea, saw aussieBum succeed and become one of Australia’s most iconic and successful brands internationally. The company’s sales now exceed $150 million.

Starting his broad career as a kitchen hand, Sean also worked in a video store where his interest in sales and marketing began. He then worked for several years for blue chip companies within their sales and marketing team before making a sea change and moving to Bondi Beach.

After spending some time as a fitness instructor and herbalist, Sean made the decision to go back to the corporate world. Sean soon discovered that moving back into that industry,  was not as easy as leaving it.

The idea for aussieBum came shortly after discovering that his favourite style of swimwear was being discontinued. Using the $30,000 deposit he had saved for a home, Sean decided to launch his own swimwear range and begun selling it out of the back of his car.

aussieBum became an instant hit with locals and expansion was the next step for Sean. Major Australian department stores weren’t interested in a new swimwear brand so Sean took his brand overseas.

For the next six-months Sean built up the aussieBum website, his determination to create a successful business never fading. During this time he designed more swimwear, photographed his friends modelling the garments, wrote press releases and sent samples to magazines across the globe.

A month later aussieBum’s first order arrived, with more rolling in soon after.  Fifteen years later the brand is one of Australia’s most successful, selling in more than 120 countries around the world and turning over more than $20 million each year. AussieBum is sold in some of the most prominent department stores across the globe including Selfridges, Harvey Nichols, Harrods, House of Fraser and Printemps.

The company currently holds the record in ecommerce sales after selling $1 million worth of swimwear and underwear in 72 hours.  AussieBum is the first Australian fashion brand to sell online to an overseas audience.  In recognition of his extraordinary work, Sean has twice been awarded Australian Exporter of the Year for Manufacturing.

Sean shared his advice on his personal experiences of taking aussieBum overseas on the recent NAB ad, telling audiences to not give up on their business.

A dedicated and highly sought after speaker, Sean Ashby shares his business journey and the challenges he faced.  His core values of innovation and loyalty are shared with his audiences as he encourages them to follow their desires no matter the obstacles. 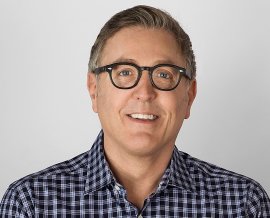