Graeme Wood is known best for transforming the travel industry after coming up with the concept and co-founding wotif.com. His idea of offering discounted accommodation at destinations across the globe began slowly but took off quickly. Graeme speaks passionately and fluently about starting a business and achieving success from almost nothing.

Coming up with the original idea in 1999, Graeme and his associates launched wotif.com a year later, with 60 properties on the website. His biggest hurdle when developing the idea was approaching big hotels and attempting to convince them to lower rates. The idea was initially rejected until they saw the potential in the site.

With a strong background in software development, Graeme had worked at IBM and several technology start-ups, igniting his curiosity in how he could potentially use technology to improve business.

In 2007, Graeme retired from his role as CEO and Managing Director of wotif.com but continues to play a big part in the company as an Executive Director.

With extensive business experience, Graeme Wood is the perfect speaker for your event. He speaks passionately about success, investment and technology, giving invaluable knowledge to the audience that can be applied to any business. 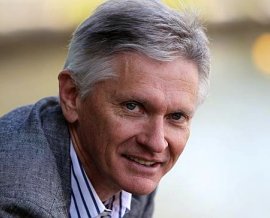