In the age of #MeToo, now more than ever, workplace leaders must take practical steps to ensure that their culture is healthy and thriving. Dr Skye Saunders is the articulate voice that every employer and employee needs to hear. Skye’s groundbreaking research on sexual harassment in rural Australian workplaces – as well as the complaints process – has established her as a leading light in the field.

Skye is a breath of fresh air. She works with her ‘Strike A Chord’ framework to show the ways that three different stakeholder groups- women, men and employers- can be practically empowered to play to their truest strengths as contributors to a thriving workplace culture.

Formerly an Employment/ Discrimination Lawyer and now an Associate Professor (Law), Skye researches, writes and advocates on all different aspects of sex discrimination. Drawing on her expertise, she operates on principles of empathy and empowerment as she clarifies the individual perspectives of key stakeholders and inspires new thinking.

Skye is a passionate and committed advocate for the advancement of gender equality. Her work comes from her heart. Growing up in Central Western NSW, she noticed some perplexing patterns of gender engagement in the rural areas.

Later, as a lawyer, she realised that nothing had been written about sexual harassment in the Australian rural environment, so she decided to fill the gap with her own research. Skye then wrote Whispers from the Bush: The Workplace Sexual Harassment of Australian Rural Women (Federation Press, 2015).

In response to her findings, Skye created the ‘Strike A Chord’ framework, which seeks to disrupt patterns of sex discrimination by uncovering the hidden perspectives across three stakeholder groups. In 2017, the Victorian Women’s Trust produced a short documentary film called ‘Grace Under Fire’, based on Skye’s research.

Appearing regularly at national and international events, she has the ability to powerfully engage hearts and minds. Drawing from her own groundbreaking research, and her expertise on gender law and policy, Skye is able to articulate important issues around sex discrimination and sexual harassment in plain and compelling terms.

She is currently researching her new book project and is about to delve into a piece of research called ‘Boys from the Bush’, which will centre on men’s perspectives on sexual harassment in the bush.

Dr Skye Saunders is an Associate Professor in Law at the Australian National University and is the Vice President of the YWCA Canberra. As a product of these roles, she holds a unique breadth and depth of wisdom – one she shares generously and warmly. She recently taught a comparative US/ Australian Gender Law program at the University of Alabama and was a delegate to the United Nations Commission on the Status of Women (CSW62) in New York with the YWCA Australia. Skye was also awarded the Chancellor’s 2017 Distinguished Young Alumni Award (University of Canberra).

Skye is a visionary speaker, anchoring fresh inspiration with tangible goals and action plans. Her ability to convey messages with clarity and resonance allows her to engage with diverse audiences, leaving a lasting impact on both hearts and minds.

Empowered
Do women feel supported in making complaints about sexual discrimination, and is the process worth it? This pivotal presentation examines ways to give women practical tools for reporting workplace sex discrimination.
From Whispers to Song
This foundation keynote focusses on changing the pitch of sexual harassment culture in the rural Australian workplace. It can be adapted for general audiences
In Confidence
Sex discrimination laws in Australia are not always easy to understand or follow. This session is essential for any employer or senior manager tasked with fulfilling a duty of care to prevent workplace sexual harassment, and what they can do if it happens anyway.
True Champions
In this deeply moving keynote, Skye invites men to be agents for positive change in a culture of sex discrimination. With her trademark non judgemental and warm approach, she helps them understand why gender quality is vital and opens eyes in unexpected ways.

Skye is an incredible speaker, who presents with warmth, intellect and compassion. She navigates difficult issues with tremendous tact and passion. I can’t recommend her highly enough

The warmth and passion that Skye emanates, makes her particularly suitable for a diverse range of public appearances and media interactions 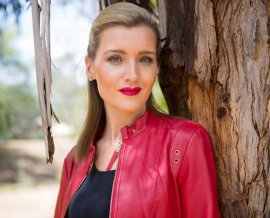