Born in South Australia, raised in Queensland and cultured in Melbourne, an innate interest in uncharted territory lured Chelsea to the intrepid world of goal umpiring at age 17. In her youth, moustached middle-aged men in overcoats were as much a fixture of Australian football as meat pies and yelling "Ball!" for holding decisions.

No moustache ... no problem! Jumping head-first into waving the flags for gender equality, it became evident to Chelsea that playing to her strengths would enable her to thrive. Lived experience has since shown the nature of diversity of thinking to drive both individual and collective performance.

In 2012, Chelsea became the first woman to umpire an AFL Grand Final. But the true breakthrough was becoming the first umpire in history to be cheered (yes, cheered!) by the crowd ahead of that epic battle between Sydney and Hawthorn.

Other highlights include being enveloped by the post-anthem roar on Anzac Day, goosebumps at Adelaide Oval during the Port Adelaide cheer squad’s emotional rendition of INXS’s ‘Never Tear Us Apart’ and having her face connect with the end of a trademark Drew Petrie spoil in Tasmania.

Before my weekend hobby became a profession, Chelsea was an aspiring musician, having received an academic scholarship to study a Bachelor of Music at the Queensland Conservatorium. Following a stint studying biomedical science, she switched to journalism, combining a love of language and communication with the adrenaline-charged life of AFL football.

She hase umpired 270+ AFL games, 16 finals and sat the bench as the emergency umpire at five AFL Grand Finals.

“I used to joke that maintaining focus amid a sea of short shorts, glistening biceps and the heady aroma of testosterone, sweat and liniment was the toughest part of the job. On countless occasions, the "barriers" of being a female in a male domain would be reduced to remarks about whether or not I was allowed to date the players or how I could concentrate in such close proximity to buff athletes. Thankfully, the conversation has shifted up a gear as people genuinely want to know, why is it that more females aren't goal umpires ... or CEOs?”

Chelsea has explored themes of culture, equality and performance in a range of forums; including as an invited guest of the APEC Women's Leadership Forum in Beijing, the United Nations Commission on the Status of Women in New York, and during a Winston Churchill Fellowship, visiting the US, Canada, UK, Sweden and India. 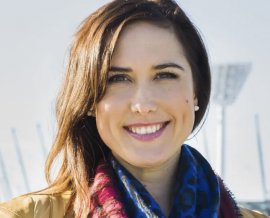