Since founding the first-ever AFL Women's team in Western Sydney in 2009, Amna Karra-Hassan is widely recognised for the diversity she brought to AFL. Her club has played a critical role in establishing the game in the region for both women and diverse communities.

Amna graduated from the University of Technology Sydney with a Bachelor in Organisational Learning and has also completed the Advanced Leadership Program with the Applied School of Management.

She is a strong advocate for the rights of Muslim women. An active leader in the community, Amna has worked for the Australian Federal Police (AFP) Community Liaison Team and the NSW Youth Advisory Council.  She led Community Engagement strategies and contributed to Reform, Culture and Standards portfolio. As a result, Amna was responsible for driving cultural change within the AFP during her nine years there. She received the Commissioner's Medal for Excellence for her work.

Since then, Amna has served on several boards for the state and federal government. This includes the NSW Youth Advisory Council, Multicultural NSW, and DFAT Council for Australian-Arab Relations. She now serves on boards for several not-for-profit organisations, such as GoActive, and is the Special Counsel for Community Engagement for the Western Sydney Leadership Dialogue. She also serves as the Organizational Development Coordinator for the Lebanese Muslim Association.

In her keynote, Amna shares her story and experiences collaborating with community leaders, small business owners, local government, traditional and social media and thought leaders. Here, she offers insights on how she led the Auburn Giants' growth and the importance of leveraging media. Amna shares how she uses a story-telling process to help others overcome adversity, build confidence and resilience, and lead with perseverance and courage.

Amna believes the heart of innovation, civic participation and community building is a "strengths-based approach" and commitment to diversity and inclusion. 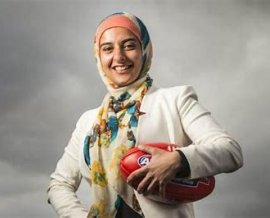