Clint Bizzell is best known for his prowess on the football field after spending 12 years as a professional AFL player for the Melbourne Demons and Geelong Cats. Since retiring in 2007, Clint has helped lead his own production company, Eve Media. Eve Media produces popular international TV travel series ‘Places We Go’ as well as documentaries, TVC’s and corporate videos for Australia’s leading brands.

After leaving football, Clint dabbled in acting, and was seen on various programs including ‘Neighbours’ and ‘City Homicide’. He went on to produce and present a variety of programs aiming to raise awareness of serious issues in Australia.

As a former footballer, Clint uses his knowledge to travel around local football clubs, presenting a program on respect and responsibility, drugs in sport and alcohol.

As a speaker, Clint is passionate about expanding audience’s knowledge and raising awareness. 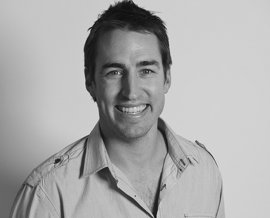