Tripod is a three man musical comedy act that is well known throughout Australia and the world. The trio use a particular brand of humour that stems from a combination of musical theatre, improve, parodies and satire combined into their lyrics. Over the years, Tripod has appeared on numerous Australian television shows including Spicks and Specks, Skit house and Good News Week. They are well known as one of Australia’s favourite musical comedy performance groups. Tripod is an Australian musical comedy act and one of the best stand up comedy performers we have seen for awhile. The trio, Scod, Yon and Gatesy, specialise in improv, parodies and satire comedy with a musical spin on things.

The three members formed Tripod during their studies at the University of Melbourne and got their big break appearing on Australia “Hey Hey It’s Saturday’s – Red Faces” demonstrating the similarities between songs in a parodic medley. The band then gained more exposure at much larger events such as the Melbourne International Comedy Festival and has since become favourites within the comedy circuit.

In 2011, their stage show “Tripod versus the Dragon” was released on DVD. This critically acclaimed performance took the world by storm, receiving a standing ovation in the USA and “Best Musical Production” after taking the stage at the Sydney Opera House and at the Edinburgh Fringe Festival.

Over the years, Tripod have appeared on numerous Australian television shows including Spicks and Specks, Skithouse and Good News Week, not to mention they have now become regulars on the music festival circuit as well, including shows at the Woodford Folk Festival, the Falls Festival and many others. 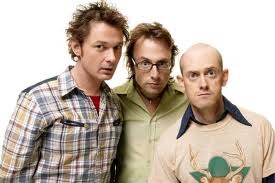