One of the most popular and funniest Australian comedians

As one of Australia's busiest comedians, Tahir Bilgic is best known for his role of Habib in the hit comedy TV show "Fat Pizza". He has since received a number of awards, starred in an array of television shows as well as performed comedy shows across the nation.

In 2019, Tahir was a participant in Network Ten's 'I'm A Celebrity...Get Me Out Of Here', where he kept campmates and audiences amused.

Tahir has received several awards for his skills, including named Comedian of the Year and a Logie nomination.

Tahir is an excellent addition to any event, tailoring his presentation to ensure maximum engagement and entertainment to his audience.

For further information on Tahir please contact one of Keynote Entertainment’s consultants on 1300 661 904 or info@keynote.net.au and we will be happy to assist you. 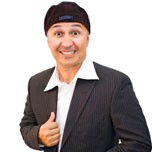