Comedian, improviser and actor Steen Raskopoulos is set and ready to entertain your audience. His sharp and quick wit has seen his popularity quickly grow within the comedy scene.

Starting his comedic career at the age of eighteen, Steen began writing and performing in sketch comedy and improv shows at The University of Sydney whilst he was completing a Performance Studies degree. During his studies he also performed at the University’s weekly Theatresports program and various sketch comedy revues. By age twenty he was awarded the title of the Youngest Ever Theatresports National Champion of Australia. Once he had graduated, Raskopoulos travelled to Chicago to study improvisation at iO.

In 2013, Steen debuted his solo sketch show, titled ‘bruce springSTEEN LIVE IN CONCERT!’, which received him a nomination for Best Newcomer at the Melbourne International Comedy Festival.   He won in the same category at the Sydney Comedy Festival.

A year later, his second solo performance, ‘I’m Wearing Two Suits Because I Mean Business’, sold out in Melbourne, Sydney, London and Edinburgh. At the Edinburgh Fringe Festival, it was nominated for the Fosters Comedy Award’s Best Newcomer.

2015 proved to be a big year for Steen with the filming of BBC Three’s comedy ‘Top Coppers’, where he starred as lead character John Mahogany. His third solo live show, titled ‘Character Assassin’, earned him a Barry Award nomination for Best Show at the Melbourne International Comedy Festival. Raskopoulos also performed at the Melbourne All Stars Gala and Sydney’s Just For Laughs Gala.

His television acting appearances include ABC’s ‘Utopia’, ‘The Code’, ‘The Record’ and ‘This is Littleton’ as well as ‘Legally Brown’ on SBS.

Currently, Steen can be found starring on Comedy Channel’s ‘Whose Line Is It Anyway’, where he uses his skills in improv and comedy to produce hilarious responses to unusual situations. He often leaves his fellow comedians and the audience in stitches. 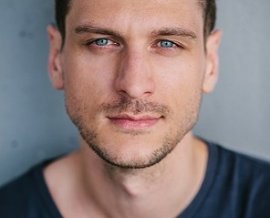