An awesome comedian keeping the energy flowing with a barrage of comedy gold.

Sean Woodland forged his dream career at the age of 40.  Commencing his stand-up comedy routine later in life has given him an acerbic wit and the ability to draw on his own life experiences to incite tears of hilarity.

Sean has to ability to deconstruct the shallow rituals, tokenism, language and pretentiousness from popular culture in the most hilarious ways.

Sean also performs in sketch comedy and is a prolific writer and author having published across a variety of magazines and newspapers.

One of the most sought-after comedians, choosing Sean Woodland will make your event a stand out success. 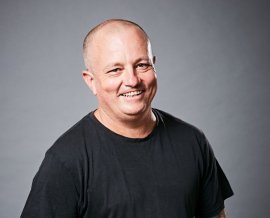