Sammy J & Randy are without question two of the most sought after comics in Australia today. Combining catchy songs with chaotic tomfoolery and outbursts of filth, these two adorable characters have an uncanny knack of charming the pants off everyone they meet.

In 2015, the duo racked up accolades around the world, from being handpicked to star in Neil Patrick Harris’ Just For Laughs TV Gala in Montreal, to performing at the Sydney Opera House, to having their live comedy DVD Sammy J & Randy: Live nominated for an ARIA for best Comedy Release.

They also managed to find time to write and perform in their debut TV sitcom, Sammy J & Randy in Ricketts Lane, which is aired on ABC TV, and was nominated for Best Comedy in the 2015 AACTA awards, along with a Best Comedy Performance for Randy.  The show will debut in the US in 2016 on NBC Universal’s new streaming comedy service Seeso.

Sammy J & Randy met on the Melbourne comedy scene, and in 2010 won Australia’s most coveted comedy award, The Barry, for their one-man/one-puppet show, Sammy J & Randy in Ricketts Lane. In 2011, they wowed audiences around the globe with Sammy J & Randy in Bin Night, then followed up with the third show in their trilogy, The Inheritance, which played to sell-out houses in Edinburgh.

The pair gained a national following on Network Ten’s Good News World in 2011, writing topical songs and sketches about news of the week. In 2013 Sammy J hosted ABC’s political satire, Wednesday Night Fever, while Randy took football fans to the brink on SBS’ The Full Brazillian. In 2012 the pair hosted the Melbourne International Comedy Festival’s Opening Night TV Gala, and in 2014 travelled to South Africa as Oxfam Ambassadors. 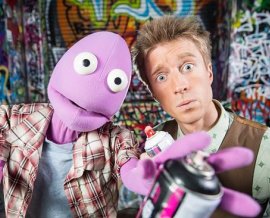