Sam is one of the most daring and unconventional comics in Australia, completely original and vastly absurd, he has one foot firmly planted into the soils of reality, and the other rooted deep into the psyche of being silly.

Sam is a multi award-winning cult figure within the Australian comedy scene. He has collected awards, glowing reviews, and played to sell-out houses around the world.

2011 saw Sam take home the award for Best Comedy Show at the Adelaide Fringe Festival, not to mention scoring a nomination for a Barry Award for his solo show, The Precise History of Things and a nomination for Edinburgh’s top Fosters Comedy Award (the comedy equivalent of an Oscar) for Meanwhile.

2012 has already been a busy year for Sam performing his show About The Weather to sell-out houses at comedy festivals around Australia before taking that same show to the prestigious invitation-only Montreal Just For Laughs Comedy Festival, Edinburgh Fringe Festival and then heading back to Australia to perform again by invitation at the Just for Laughs Festival at the Sydney Opera House.

Joyous on the radiowaves, Sam has made Australian youth radio network Triple J his own. 2008/09 saw him at the helm of the Weekend Breakfast Show as well as weekday Breakfast and Drive Shows and he is still now a regular contributor across the station.

In 2012 Sam assembled a wonderful cast of Australia's pre-eminent absurdists for Problems (ABC1) a four-part journey through the cream brick neverland that is the Australian suburbs.

In 2011 Sam’s first stand-up DVD was released of his hit 2010 show Fail through Madman Entertainment as part of the Warehouse Comedy Festival and a half-hour special of this release was broadcast on ABC TV.

2013 will see Sam back on stage in Australia with Shitty Trivia and back on board a plane with seasons already planned for North America, including the 2013 Montreal Just For Laughs Comedy Festival.

Alongside his comedy, Sam has worked within animal enrichment at the Melbourne Zoo with elephants, seals, reptiles and small native mammals a breathlessly inventive psycho-comedy. 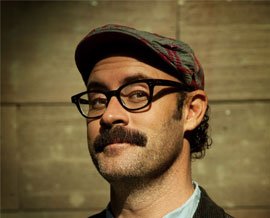