Malaysian Chinese Ronny Chieng was raised in the USA and Singapore, before moving to Australia and graduating with a Commerce/Law degree from the University of Melbourne in 2009.

A regular on the lists of rising comedians and faces to watch, Chieng won the Best Newcomer award at the 2012 Melbourne International Comedy Festivals (MICF) for his debut stand up show, The Ron Way. The critically acclaimed show sold out its entire MICF season including extra shows, and received rave reviews at the Sydney Comedy Festival the same year.

In 2012 and 2013, Chieng performed at the prestigious invitation-only Just for Laughs Comedy Festival in Montreal, as well as selling out his entire 2-week run at London’s Soho Theatre in the West End.

In 2013 Chieng was once again named one of the “Top 10 Hottest Comedians” by The Age and the Herald Sun in Melbourne. He performed on the nationally broadcast 2013 MICF Gala, as well as the Sydney Comedy Festival Opening Gala at the Opera House. He sold out the entire 24-show season of his second show, Can You Do This? No You Can’t, including being moved to larger venue and selling out an extra 1400-seat show in the Main Hall of the Melbourne Town Hall. He also received a nomination for the 2013 Sydney Comedy Festival, Best of the Fest (Local) award.

2013 also saw Chieng make his Edinburgh Festival Fringe debut with rave reviews for his show The Ron Way. He followed it up with a return season at the Soho Theatre in London playing to packed houses.

In 2018, Ronny acted in a starring role in the instant blockbuster 'Crazy, Rich Asians', based on a novel of the same name. 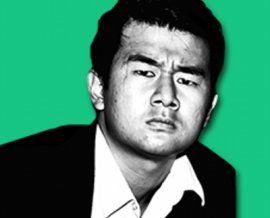