Rhys Darby is an entertainer through and through, impressing and engaging with any audience he is put in front of. His comedic attributes and fun personality have proved popular with audiences across the globe.

First gaining attention by playing hapless band manager Murray in HBO’s Flight of the Conchords, Rhys became a familiar face on screen. He also starred alongside Jim Carrey in the 2008 movie ‘Yes Man’, as well as ‘The Boat that Rocked’, ‘Coming and Going’ and ‘Lovebirds’. As well as being featured in movies, Rhys has also starred in television shows Modern Family, How I Met Your Mother, Wrecked, Voltron and The X Files.

Although his popularity on screen continues to flourish, Darby never strays far from his stand-up roots, often performing to audiences across the globe including New Zealand, United Kingdom, Iceland and the Falkland Islands. He has also attended several comedy festivals such as the Edinburgh Fringe Festival and Montreal’s Just for Laughs.

As well as starring live, he has also released three stand-up DVD’s, ‘Imagine That’ filmed in Los Angeles in 2008, ‘It’s Rhys Darby Night!’ filmed in Auckland in 2010 and ‘This Way to Spaceship’ filmed in 2012.

‘This Way to Spaceship’ was originally a book written by Darby before he turned it into a stage version, toured the world with the show ultimately filming the New Zealand performance and releasing it as a DVD.

Currently, Rhys can be found starring on the Australian version of ‘Whose Line Is It Anyway?’ on Foxtel’s The Comedy Channel. His fast wit and impeccable humorous qualities have made him popular with both audiences and cast mates. 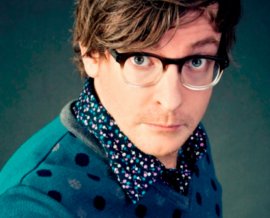