Comedian, actor and a familiar voice.

On radio, Rebecca has been the voice­over artist for Triple J's  Breakfast Show  and has been guest co­host of Late Night Chaser,  Triple M Breakfast , Tom and Subby, The Shebang  and is still a regular guest on Thank God It's Friday (ABC 702) .

For two years Rebecca was the voice­over artist forThe Comedy Channel and continues to work extensively in the world of voice­overs, including Happy Feet 2 , working alongside Robin Williams, Hank Azaria  and Elijah Wood.

Earlier this year Rebecca starred in the Australian premiere of the hit US show Spank!: The Fifty Shades Parody.

Rebecca has been an improviser for over 15 years and has performed regularly at Belvoir St Theatre  and Enmore Theatre .

Rebecca is a two time Cranston Cup Champion and was a member of the Australian team which won the Improv World Cup  at the 2001 Just for Laughs Festival in Montreal. Rebecca was the first woman in history of the competition to be named Player of the Tournament.

In 2003 Rebecca was nominated for Most Outstanding Newcomer to Television at the inaugural Australian Comedy Awards  and in 2005 was a Moosehead Award recipient for her solo improvisation show Open to Suggestion  at the Melbourne International Comedy Festival .

In 2009 Rebecca devised and performed Sincerely Yours: An Improvised Love Story  with Derek Flores (3 Canadians, Second City Toronto) which was nominated for Best Comedy at the 2009 New Zealand Fringe Festival.

Rebecca's latest solo show Kiss My Date , which she wrote, performed and produced, recently won the Pick of the Fringe Award for Comedy at the 2013 Sydney Fringe Festival 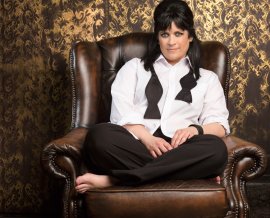