Nikki exploded onto the comedy scene in 2011. Her warm, lightning paced style won her the Quest for the Best competition and saw her recently nominated for Best Comedy at the Perth Fringeworld Festival with her most recent show Romanticide,which played to sold out houses and critical acclaim across the country during this year’s festival season. It was her fourth solo hour show. She has performed nationwide for the last 5 years with the Melbourne International Comedy Festival Roadshowand Sydney Comedy Festival Showcase Tours and recently appeared on ABC’s Comedy Up Late. Nikki hosted Comedy Central’s Insert Venue for Fetch TV and is a sought after MC for cruises and comedy and corporate events for her charming effervescence that endears her to any audience. She starred as Grandma as part of ABC’s Stand and Deliver. She has also performed internationally at LA’s Laugh Factory, The Hollywood Improv and The Edinburgh Festival Fringe. She is a member of sketch comedy group, 5 Servings of Ham who premiered their show Tangara at The Sydney Comedy Festival in 2017.

Nikki trained at Sydney’s ACA as an actor and L’ecole Philippe Gaulier as a clown. She spent 2 years touring the juggernaut one woman play, 51 Shades of Maggie Muff to over 16,000 fans across Australia, playing the title character. She has also played Gabe in Stories from the Wayside and Abbie in the Australian premiere of Click Tease, and has been part of the development of many Australian Theatre works such as The Bloody Bride (Norpa and Hilary Bell), Boy/Girl (Daniel Henshall and Anthony Skuse)and Citrus Paradisi (Daisy Noyes) . She recently finished shooting the pilot for a new ABC webseries Sheila’s, plays the lead role in Table for one, and appears in Matt Okine’s The Other Guy, all due for release later this year. She is featured in many TV commercials including Foxtel, ALDI and Hotels Combined.

As a playwright, Nikki was nominated for a Glug award in 2016 for her work on Hidden Sydney and is currently working on Palomacy for the Griffin Theatre. She is involved in TV writing projects, both in Australia and the US. 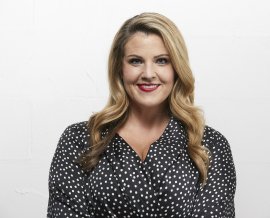